See: the video for Masayoshi Fujita’s ‘Thunder’; a flow of sonic delight for electronica and marimba on Erased Tapes

Apparently, Stryper have been back at it since 2005. They've just released their newest and 17th album called God Damn Evil, but without original bassist Tim Gaines. If you've been following these guys for the past 30+ years, I think you'll like this album. If not, then I guess this is a hard pass for you.

It was the summer of 1987 and I was a rebellious teenager. I was looking for all kinds of ways to get into trouble and stick my middle finger up at authority. Staying up till 2am watching The Morton Downy Show, drinking way too many Capri Suns, and dropping Pop Rocks and Coca-Cola like there was no tomorrow. Hell, I would even occasionally swerve my dirt bike into the left lane(of course only when there was no traffic coming…I wasn’t insane.) Yeah, that summer I sowed my wild oats. But it wasn’t until I came home wearing a Stryper “The Hell With The Devil” t-shirt that my parents really started to worry about my well-being. One minute I was a happy and precocious young man buying PMRC-banned albums and nonchalantly humming along to “Whole Lotta Rosie”, the next I’m donning a shirt with “777” on the front. Where did I veer off the tracks? What prompted such aberrant behavior from a once mulleted, run-of-the-mill teen boy with a bright future ahead filled with underage drinking, premarital sex, dive bombing academia, and possibly a stint in a devil-worshiping cult? One word:

Yes, the once yellow and black-striped Christian metal band from California who in the 80s made it seem almost kind of cool to be the righteous Christian in the friend group. “You see? These guys have long hair and eyeliner, too. They play heavy riffs and scream like a banshee, too, but their message is of love, faithfulness, and waiting to have sex until you’re married!” said nobody in my friend group. You see, I didn’t have any sort of “Come to Jesus” moment. Stryper were the hot topic in the summer of 1987. One of my best friends dug their track “Honestly” because it was seemingly the way to a teenage girl’s heart(and to some heavy petting at the movies.) So in a moment of curiosity while staying with my very Christian and youth pastorly Uncle I took a dive into the world of Christian metal. We headed to the Pierre Moran Mall in Elkhart and at the local record shop I bought Stryper’s To Hell With The Devil, as well as a black t-shirt that donned the “777” number on the front and on the back it said “To Hell With The Devil”. 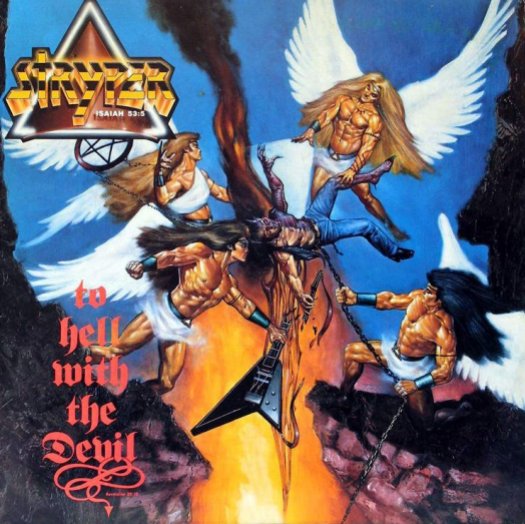 I was on my way to rock and roll salvation, maybe?

The t-shirt shrunk after the first wash and became a rag for my dad to use while washing cars, but I did enjoy Stryper’s album on and off for a couple years. I even blew lunch money on their previous albums Soldiers Under Command and The Yellow and Black Attack. Stryper kept at it for a few more years releasing In God We Trust in 1988(I bought it, along with Scorpions’ Savage Amusement on a trip back to Pierre Moran Mall.) I gave the Sweet bros my money one more time when they released Against The Law. They reeled me in with their funky cover of Earth, Wind, and Fire’s “Shining Star”, but that interested quickly feigned. The band broke up in 1992. I found myself on a years-long binge of Rush, power pop, and a newfound love of classic songcraft and a lifelong weariness of anything religious. Stryper did what they did well. They gave kids in youth group and in the heavy church life something to latch onto that connected with the secular world, while still not denying their belief system. And they were a pretty good rock band, more or less.

Apparently, Stryper have been back at it since 2005. They’ve just released their newest and 17th album called God Damn Evil, but without original bassist Tim Gaines. If you’ve been following these guys for the past 30+ years, I think you’ll like this album. If not, then I guess this is a hard pass for you.

About the Author J Hubner

Born in the bosom of the Midwest, USA, J Hubner grew up in a woods next to a cornfield that was just a throwing distance to a lake. Music has been a constant in J Hubner's life since he was a little kid soundtracking epic battles with Star Wars action figures with his older brother's Deep Purple, Megadeth, and W.A.S.P. cassettes. He started playing guitar at 12 and since 2006 has self-released 10 albums under the names Goodbyewave, Sunnydaymassacre, Dream District, and J. Hubner. Three years ago J Hubner began writing about music independently. Album reviews, artist interviews, and general musings on his love of music. He writes at www.jhubner73.com, www.backseatmafia.com, and several smaller musical publications. J Hubner is married with three kids and a miniature schnauzer named Otto. He still resides in the Midwest, USA. Near that same lake.
Twitter Facebook Google

See: the video for Masayoshi Fujita’s ‘Thunder’; a flow of sonic delight for electronica and marimba on Erased Tapes