Track: Brisbane’s Lite Fails evokes an electronic pastoral bliss with double single release ‘On A Clear Day’ and ‘What The Bellbirds Were Saying’

Album Review: Nick Hakim: – Will this make me good

Soundtrack of our lives: River Nelson picks his all time favourite hip-hop playlist

Album Review and Interview: Gareth McLaughlin – Into The Ether

Cherry Poppin’ Daddies, best known for their 1997 hit “Zoot Suit Riot” have been playing music since 1989 and continue to bring their swing, ska, jazz and various other sounds to live audiences. Last Saturday they played the Tracyton Movie House in Bremerton, Washington with support of Washington based band Cockaphonix. Backseat Mafia’s Anthony Moore was there taking photos of the show.

Having seen Cockaphonix several times this year, they brings a unique instrumental sound of funky spooky jazz tunes that consist of a three piece brass section, drums and a 100 year old piano. They quickly got the party started, adorned in face paint and full of what seemed to be unlimited energy. The brass section kept the crowd engaged with running up and down the aisles of the theater while playing and one point throwing necklaces and plastic dolls into the crowd. While not much in the way of lyrics, mostly laughs and chanting of sounds, the music definitely brings you out of your seat wanting to join in the good time the guys are having on (and off) the stage.

When Cherry Poppin’ Daddies took the stage next, the crowd was all warmed up ready to keep the party going.

The Daddies played some covers including Irving Berlin’s “Putting on the Ritz” and plenty of originals spanning their 30+ year catalog of originals. The packed audience for this show spanned all ages, and everyone was dancing and having a good time. Before we knew it, it had been 2 hours since Cherry Poppin’ Daddies took the stage and our night was quickly coming to a close. You could tell the crowd enjoyed every minute and when the drums kicked in for intro “Zoot Suit Riot” it was a jolt of adrenaline for anyone who may have been sitting taking a rest. The floor in front of the stage became crowded as everyone came out of their seats to sing and dance along as if it was 1997 again. Finishing the night with their namesake song “Cherry Poppin’ Daddy Strut”, the lights came up and the crowd was brought back from the 1920’s into the 2020’s.

Cherry Poppin Daddies 11th LP “Bigger Life” and the 25th anniversary edition of “Zoot Suit Riot” is currently available for purchase on CD, vinyl and download from the bands website.

Previous News: EWAH and the Vision Of Paradise's Emma Waters presents special showings of film 'Finding Paradise' with a soundtrack from the band's album 'The Warning Birds'. 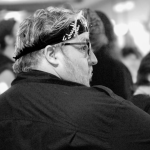 Premiere: The Rookies prove they are no beginners as they unveil a blast of über cool jazz in the steaming track ‘Dry Bones’ ahead of new album.

From an old record box: Cecil – The Most Tiring Day

PREMIERE: A.M. Boys set out their stall with the hyperdetailed ‘A.M. Theme’, pencil in debut album for the summer