See: Myles Sanko shines in heartwarming ‘ BlackBird Sing’ ahead of his album ‘Memories of Love’

Spontaneity can be a risk, and a risk is something that bands – aside from those belonging to the highest, top-billing, festival-headlining echelons – aren’t always willing to take. But a triptych of Scunthorpe talent threw caution to the wind and announced an impromptu, DIY pop-up gig at Café Indie, with less than a week’s notice. Reliant upon whipping up a feverish social media wild-fire in such a short burst of time, impulse rivalled pragmatism in a bid to generate awareness and draw in a crowd. Let me tell you, never has it been more evident: fortune favours the brave. To plan is to be boring, and to be boring is something the Scunthorpe scene just doesn’t have time for.

On a typical night, the crowd is a small menagerie of regulars, but for WeirdWolf, The Claxbys and The Last Hearts, people – familiar and new – came in droves. For such a spur of the moment gig, the crowd far exceeded expectations; by some twist of irony, the tally counter reached in excess of 80 people regardless of it being based on last minute invitation and improvisation. If that doesn’t attest to the potency of Scunthorpe support, I don’t know what will.

WeirdWolf opened the night with their debut live performance. This local four-piece had a first impression to make, and let me tell you, sonically, they made a good one. WeirdWolf – though heavy at their core – are musically complex in that they seem to encompass the more melodic, feverish dimensions of the genre whilst unifying this with the abrasion, lack of restraint and the fervency it demands. This sound is finished with vocals that carry the high-octane dynamism of the likes of Muse’s Matt Bellamy, which made the set something infectious to listen to, regardless of it being to your usual taste or not. I’m keen to see how WeirdWolf will establish themselves as a live band on the scene: the equilibrium brought between the musical sophistication they’ve already showcased, and their presence on stage prophesises a band that will make their mark.

Following this act, the youthfully energetic household name The Claxbys shifted the gig into a different gear. Having seen the band a number of times, let me tell you: this performance is their best yet. It was written all over their faces. The Claxbys, make no mistake, have an inimitable onstage presence that is an immediate crowd pleaser. Their anthemic, chant-worthy set list and distinctive effervescence translates seamlessly into a live performance that has everybody moving. But with a larger gathering than usual, The Claxbys really came into their element. The crowd echoed the lyrics to the tracks and there were waves of dancing throughout the set – it was the audience giving back infused with the carefree, contagious music that made The Claxby’s performance the best so far.

The last band to take the stage were the Scunthorpe favourites, The Last Hearts. Until that night, I had never seen the band perform: my expectations were set rather high, what with the reverence and rave reviews in their wake not only from fans, but from fellow bands on the scene. I was not disappointed – this band went all out. What gave The Last Hearts their edge was the prelude to their performance: a poet delivered a shamanic, spoken word performance evoking the spirit of what The Last Hearts are about. Delivering a brazen message of rejection of the establishments that dictate our lives, and a message of the importance of individuality, the performance created an energy that had the crowd electrified for the set.

With their freshest single Sharks as the entrée, we were plunged into the performance without the chance to gasp for air. There’s something about The Last Hearts, be it their reckless audacity; their tight, musical synchronisation; or their revelry on the stage that seems to completely electrify a crowd, that made them such a highlight of the night. Their instrumental is as furious as the vocals that accompany it, all the while retaining a catchiness that made the set something pretty special. Tom Powell, the frontman of the band, said it was “the best gig we’ve ever done”.

Of all the gigs I have ever had the pleasure of attending in Scunthorpe, I think this one showcases the best the scene has to offer. These three bands have something important: all the friends, family and fans who turned up that night to show support and made it something far greater than the benchmark. Music journalists talk all the time about the energy a band has to offer, but what about the crowd? We seem to forget what they contribute. Good music, good performers: it’s a start – but when the crowd is as passionate as this one was for the bands they love – that makes a show. 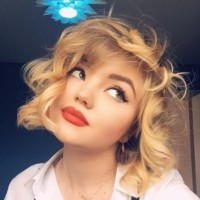 About the Author Sophie Walker

Track: The iconic James releases anthemic single ‘All The Colours of You’ and announces new album for June